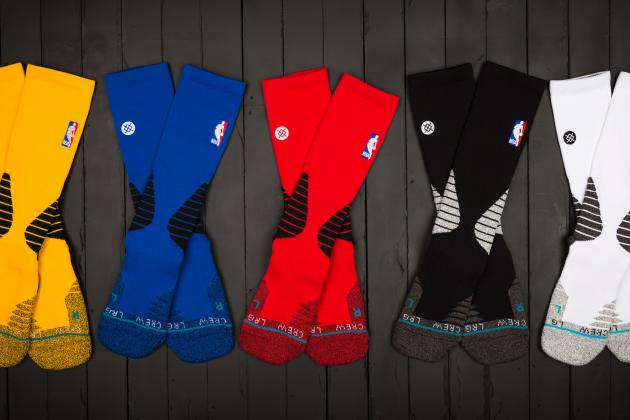 They were comfortable socks, but mostly, it was about the logo at first.

If you spend enough time around NBA players, that’s what you’ll hear the most when it comes to their highly coveted socks. Players are constantly asked by their wives, girlfriends, family members and friends to get them pairs of the legendary NBA footwear.

“For me it was mostly about having the NBA logo on when I’m wearing my sneakers,” Dwyane Wade told Bleacher Report. “It wasn’t even about the sock. When you’re young, you don’t grow up caring about the socks. It’s all about the shoes. But you want to feel like an NBA player, and there are certain things that make you feel that way, even something as small as the logo on the socks. It’s a big deal.”

When he had his predraft workout with the Miami Heat in 2003, Wade couldn’t wait to get his hands on some pairs of those socks. But the Heat’s trainers forbade players from wearing them because of the effect that cotton can have on their feet in high-intensity workouts.

It was an unpleasant surprise. 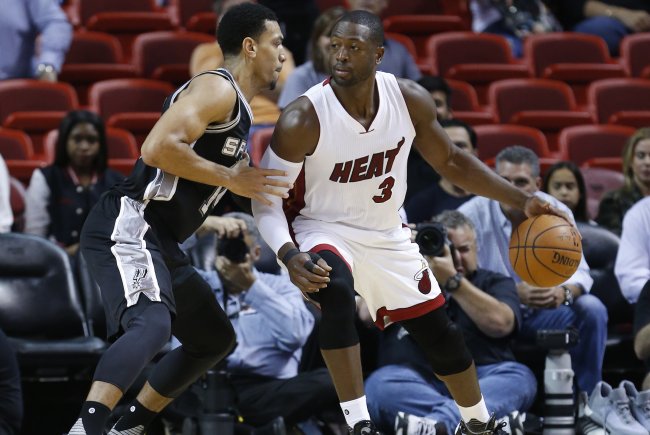 “I came to my workout in Miami before the draft, and when you’re a rookie, you try to get all these socks and take them home,” Wade said. “So I come to the Heat workout, and it’s no dice. They don’t do the NBA socks. I was shocked, and I was kind of angry.”

Things are different now. In April, the league announced an on-court deal with Stance, who had previously released limited runs of the popular Hardwood Classics socks featuring retired NBA players. Not only will Stance produce the socks that players wear on the court, but they will be available to buy in stores.

No longer will players have to sneak extra pairs for their family members.

The new product is a radical reinvention of one of the most basic elements of the NBA uniform. For years, the league mandated solid-colored socks for players to wear on the court, which were produced by FBF Originals; the Stance models feature more innovative designs both visually and mechanically, folding in teams’ colors and logos while reimagining the structure and materials.

“Our sock before Stance was a good performance sock,” said Lisa Piken, the NBA’s vice president of licensing. “It did all the things a basketball player needed it to do. But the Stance sock is a superior performance sock. It’s an extremely comfortable, cushy sock. But we really wanted to try to innovate and create.

“When Stance came to us, we had white and black and then on some special occasions we’d go a little crazy. They wanted to do that every day. They wanted people to tune in to see what these guys are wearing. They have a very different approach, and it was intriguing to us.”

Even after cutting a licensing deal with the NBA for the Hardwood Classics socks in 2013, it took a while for Stance to convince the league that it was more than a cute startup company selling novelty footwear. From the beginning, Clarke Miyasaki, Stance’s executive vice president of business development, had his eyes on the court and in the locker room.

The league wasn’t so open to the idea of switching on-court providers at first.

Eventually, he decided to try a Hail Mary. He asked his bosses for a $1 million check made out to the NBA, which he nonchalantly slipped to Piken during a meeting at All-Star Weekend in New Orleans in 2014.

“I could kind of feel the ‘No’ coming,” Miyasaki said. “I’ve done a lot of deals by this point. But I said ‘Hey, before you say no…’ and then I pull out the envelope and slide it across the table, and Lisa picks it up and she opens it and kind of smiles and looks at me like, ‘That’s not a real check.’” 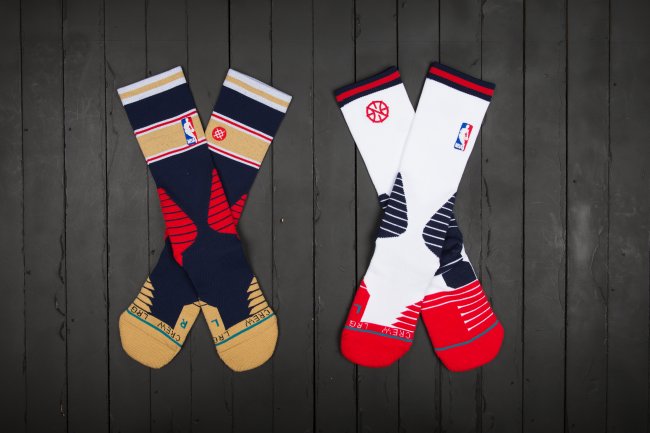 “When we first started working with them, everything they were doing was more in the fashion space,” said Piken. “They would make comments like ‘Yeah, when we’re on the court in two years…’ and allude to the fact that they wanted to do this. [The million-dollar check] was eye-opening. It made us go, ‘Wow, they mean it. They want to get this product on our players.’”

“That kind of changed the tone,” said Miyasaki. “They started taking us a little more seriously after that.”

From there, it was a matter of Stance selling the league on the technological side of the company. By and large, the players were happy with the product they had been wearing on the court for years.

Why change something so integral?

Stance began soliciting feedback from players around the league, including Wade, who had previously collaborated with the company on his own line of casual socks. Stance began sending Wade early prototypes to work out in, and he would tell the company what he liked and didn’t like. An early version, for example, had a rubber grip on the soles, which Wade wasn’t a fan of.

Eventually, Stance settled on a design that doesn’t feature uniform padding around the entire foot.

“It’s not the same material all the way around the sock,” said Miyasaki. “There’s targeted cushioning in the heel and in the toe box. There’s targeted cushioning to prevent a Jones fracture. Ankle padding. The places where you need it. So instead of that full loop construction on the top of the foot bed, we actually put in mesh to help with moisture management, so your foot doesn’t feel sweaty. And that prevents some fatigue and keeps the heat away.

"So a player may initially say, ‘This isn’t as thick as the old NBA sock.’ But it’s as thick in the areas that matter.”

The NBA agreed to let Stance test its new socks on the court at the All-Star Game in New York last season and received largely positive reactions from players. 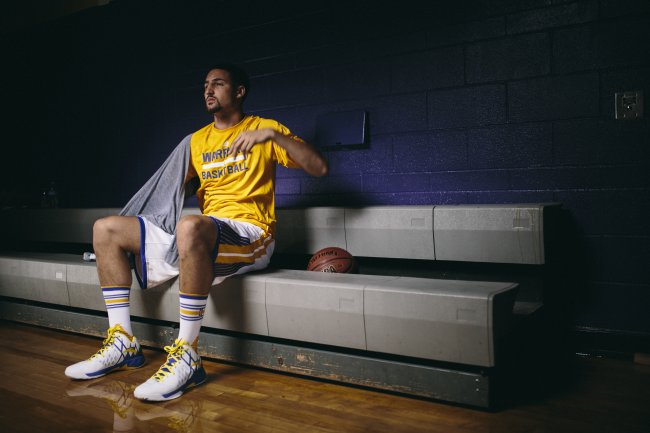 “We’re trying really hard to be understanding of the fact that a lot of these guys have been wearing the same socks for 15 years,” Miyasaki said. “And while we’ve put in tens of millions of dollars in innovation and a decade of man-years to work toward creating what we think is the best basketball sock in the world, we’re also saying, ‘Hey, it’s different, and we want to hear your feedback.’”

For the players, the visual element of the socks is just as important as the feel—it goes back to the iconic NBA logo on the ankle. But beyond colors and designs, players are particular about the length and thickness too. Stance consulted with equipment managers around the league to get a handle on how players liked their socks and even how to wash them properly.

“Players really care about the length,” said Wade. “You look at Kyle Korver, he wears socks up to his knees. You look at someone else, he might wear ankle socks. So the different lengths are very important because every guy has his own style. From there, it’s the comfort. Some guys wear one sock, some guys wear two, some guys wear one thick sock. So you have to have a certain comfort that everybody can choose from. And there’s a difference in how it feels depending on which sneaker you’re wearing.”

For the designs themselves, the only guideline the league gave Stance was to stick to the individual teams’ colors. Beyond that, the company had license to do whatever it wanted.

For the first time, socks will feature team logos. Each team has several designs to choose from, which include variations on patterns in their colors. Special events such as Christmas and Black History Month will feature their own special socks, but it’s mostly up to the teams what they wear.

“We decided early on, ‘Let’s let the teams decide,’” said Miyasaki. “We’re not going to come in and say, ‘Logo socks go with this uniform, striped socks with this uniform, solid socks go with this.’ We let them decide which ones they like. We were hoping they picked the designs. We want them to pick the ones that we put some effort into or that have the team logo on them. And we were really happy to see that most teams lean toward the more design-specific sock than just the solid sock.” 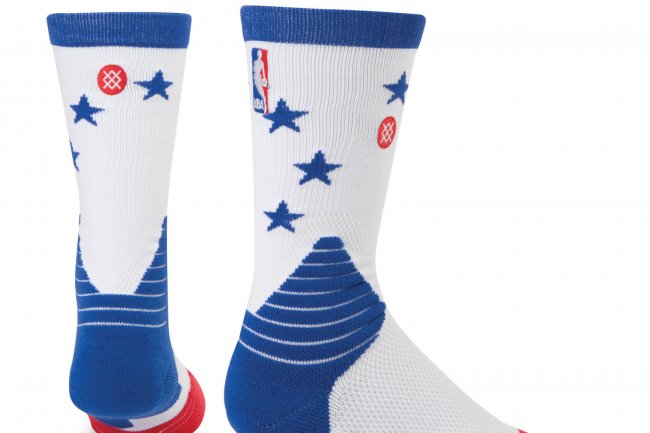 All parts of the NBA uniform have to be engineered for maximum comfort and function, but basketball is above all else a visual sport.

NBA players have iconic, legendary signature shoes that have developed a thriving culture and community of their own. The reinvented on-court socks are another wrinkle—another opportunity for the league to give itself some added visual flair as it continues its efforts to grow the sport globally.

“We expected players to be a little skeptical coming into this, because we’re literally changing a piece of equipment,” said Miyasaki. “So we’re totally understanding when we hear about a player having concerns about the sock. But so far, the feedback has been overwhelmingly positive.”

“Guys aren’t used to change,” added Wade. “The first year is going to be an adjustment for some. But I think the majority of the league will enjoy the change.”